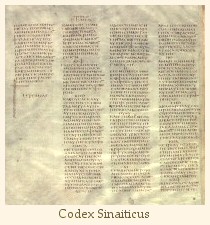 Codex Sinaiticus was discovered by Constantin Tischendorf in a convent at the foot of Mount Sinai. It contains the entire Greek Bible, plus the Epistle of Barnabas and most of the Shepherd of Hermas (early Christian writings which were widely used in teaching). It is believed to be from the fourth century, but somewhat later than Codex Vaticanus. Prior to its publication Tischendorf had given a descriptive account of the manuscript with a sample of its readings in Notitia editionis Codicis Bibliorum Sinaitici auspiciis Imperatoris Alexandri II. susceptæ ... Edidit Ænoth. Frid. Const. Tischendorf, &c. (Leipsic, 1860).

The text of Sinaiticus (written in four columns to the page) contains an unusually high number of readings which have clearly arisen by transcriptional error, most of them by careless omissions. Aside from these, however, the text closely resembles that of Codex Vaticanus, and so the discovery of Sinaiticus had the effect of increasing the already high reputation of that manuscript. Readings which are shared by both of these codices are usually regarded by critics as deserving of special attention (see Westcott and Hort 1881). 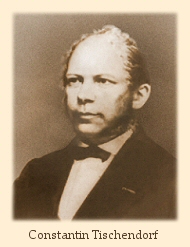 In March 2005, officials of the British Library announced plans for the publication of the complete manuscript in high-resolution images on CD, on the world wide web, and in a high-quality facsimile volume, together with other resources pertaining to the manuscript. The project has been assigned to the Institute for Textual Scholarship and Electronic Editing at the University of Birmingham. The Codex Sinaiticus Digitisation Project is expected to be finished by 2010.