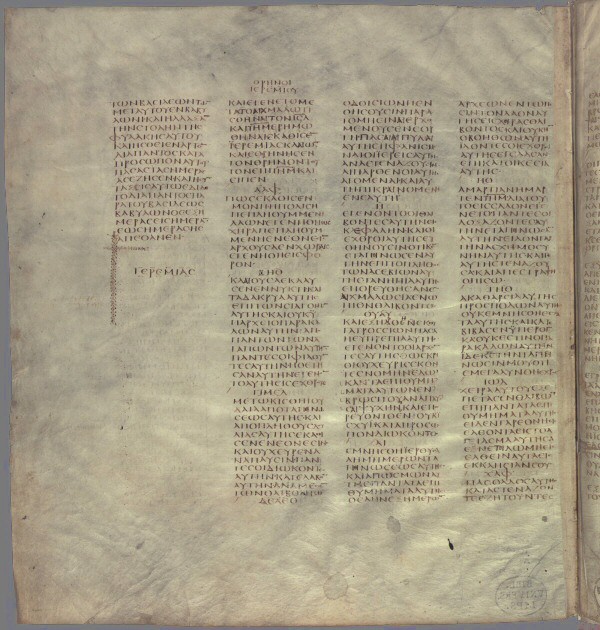 32 [and spoke kindly to him, and set his throne above] the kings that were with him in Babylon, 33 and changed his prison garments: and he ate bread continually before him all the days that he lived. 34 And his appointed portion was given him continually by the king of Babylon from day to day, until the day when he died.

And it came to pass, after Israel was taken captive, and Jerusalem made desolate, that Jeremias sat weeping, and lamented with this lamentation over Jerusalem, and said

ALEPH. How does the city that was filled with people sit solitary! she is become as a widow: she that was magnified among the nations, and princess among the provinces, has become tributary.

2 BETH. She weeps sore in the night, and her tears are on her cheeks; and there is none of all her lovers to comfort her: all that were her friends have dealt deceitfully with her, they are become her enemies.

3 GIMEL. Judea is gone into captivity by reason of her affliction, and by reason of the abundance of her servitude: she dwells among the nations, she has not found rest: all her pursuers have overtaken her between her oppressors.

4 DALETH. The ways of Sion mourn, because there are none that come to the feast: all her gates are ruined: her priests groan, her virgins are led captive, and she is in bitterness in herself.

5 HE. Her oppressors are become the head, and her enemies have prospered; for the Lord has afflicted her because of the multitude of her sins: her young children are gone into captivity before the face of the oppressor.

6 VAU. And all her beauty has been taken away from the daughter of Sion: her princes were as rams finding no pasture, and are gone away in weakness before the face of the pursuer.

7 ZAIN. Jerusalem remembered the days of her affliction, and her rejection; she thought on all her desirable things which were from the days of old, when her people fell into the hands of the oppressor, and there was none to help her: when her enemies saw it they laughed at her habitation.

8 HETH. Jerusalem has sinned a great sin; therefore has she come into tribulation, all that used to honour her have afflicted her, for they have seen her shame: yea, she herself groaned, and turned backward.

9 TETH. Her uncleanness is before her feet; she remembered not her last end; she has lowered her boasting tone, there is none to comfort her. Behold, O Lord, my affliction: for the enemy has magnified himself.

10 JOD. The oppressor has stretched out his hand on all her desirable things: for she has seen the Gentiles entering into her sanctuary, concerning whom thou didst command that they should not enter into thy congregation.

11 CHAPH. All her people groan, seeking [bread: they have given their desirable things for meat, to restore their soul: behold, Lord, and look; for she is become dishonoured.]