Richmond A. Lattimore, The Four Gospels and the Revelation, Newly Translated from the Greek by Richmond Lattimore. New York: Farrar Strauss Giroux, 1979.

Richmond A. Lattimore, Acts and Letters of the Apostles, Newly Translated from the Greek by Richmond Lattimore. New York: Farrar Strauss Giroux, 1982. 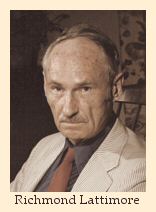 Richmond Lattimore (1906-1984) was a classical scholar, poet, and professor of Greek at Bryn Mawr College from 1935 to 1971. He is best known for his translations of the Illiad (1951) and Odyssey (1967). His translation of the New Testament appeared in two volumes, the first (containing the Gospels and the Revelation) in 1979 and the second (Acts and Epistles) in 1982. He died in 1984. Twelve years after his death the publisher of the original volumes issued the complete New Testament in one volume (1996).

In his Preface to The Four Gospels and the Revelation (1979) Lattimore shows most interest in the literary characteristics of the Greek, and explains that his translation is designed to exhibit the style of the original.

I have held throughout to the principle of keeping as close to the Greek as possible, not only for sense and for individual words, but in the belief that fidelity to the original word order and syntax may yield an English prose that to some extent reflects the style of the original. (p. vii.)

It will follow, or should, that since each of the Gospels, and Revelation, is the work of a different author with a different style, they should read differently in English. I noted that Revelation seemed to translate itself, and my aim has been to let all of my texts translate themselves with as little interference as possible. (p. ix.)

Lattimore states that he “simply followed the text of Westcott and Hort,” with a few “rare exceptions.” He presents the text in paragraphs, without chapter or verse numbering, and without any footnotes. A few simple notes are given in an appendix, but there are no marks in the text referring to them.

Lattimore was not a biblical scholar, and may not have been well acquainted with some matters of New Testament interpretation. The study of the Greek classics does not especially prepare one for understanding of the later Greek of the Hellenistic era, or the Hebraisms that abound in biblical Greek. He states in his preface that he “regularly consulted The Pelican Gospel Commentaries,” a liberal series written for laymen, and he sometimes refers to these commentaries in his notes. There is also good reason to think that he was influenced by the Revised Standard Version (RSV), because the Pelican series was based on it, and there are many verbal agreements with it in Lattimore’s translation which seem more than coincidental.

Compared with the RSV, Lattimore’s translation is sometimes more literal and sometimes less. Its style is consistently less formal. We will illustrate the differences with some passages from the first chapter of Luke’s Gospel.

Here Lattimore’s active construction “as those who saw ... handed it down” reflects the Greek syntax more literally than the RSV’s passive “as they were delivered to us by ... eyewitnesses.” Both have supplied a pronoun as the object of “handed down/delivered,” but the RSV’s “them” is more appropriate than Lattimore’s “it.” The RSV’s “having followed” is a more literal reproduction of the Greek participle than Lattimore’s “since I have followed.” Lattimore’s “from the first” is certainly a better translation of anothen than the RSV’s “for some time past.” (1) Lattimore’s “to write it out in order for you” is more literal than the RSV’s “write an orderly account for you.” Regarding “learn the truth” vs. “know the truth,” neither is very literal, though the RSV is closer. The Greek says “know the certainty” (i.e. have certainty). The RSV’s “the things” is a better translation of logon than Lattimore’s “those stories.” The “been informed” of both versions is a rather weak rendering of katechethes, which would be better translated “been instructed.” (2) All things considered, Lattimore shows more concern for “fidelity to the original word order and syntax,” as he says in his preface; but in my opinion the RSV (despite its flaws) gives a more accurate translation of these four verses.

Here we note that in verse 26 Lattimore omits “from God,” probably by an oversight. In verse 27 he uses the more modern word “engaged,” but the RSV’s “betrothed” is more accurate. In verse 29 his “asked herself what this greeting might mean” is less literal and less formal than the RSV’s “considered in her mind what sort of greeting this might be.” In verse 33 Lattimore translates the idiom eis tous aionas literally with “through the ages,” while the RSV correctly gives the sense “for ever.” In verse 34 Lattimore again translates an idiom more literally, “I know no man.” If this idiom is understood by the reader, it is more accurate than the RSV’s rather vague “I have no husband.” In verse 35 the RSV’s “upon you” is a more accurate rendering of epi se than Lattimore’s “to you.” At the end of verse 35, Lattimore’s “Therefore the offspring will be called holy, the son of God” seems to have been influenced by the RSV’s incorrect rendering “therefore the child to be born will be called holy, the Son of God.” This is a most unnatural way to interpret the Greek syntax. A much more natural and logical interpretation of to gennomenon hagion klethesetai hios theou is, “the begotten holy thing [the subject of the sentence, in the neuter to emphasize its quality] shall be called the son of God.” In verse 37 the RSV translates para tou theou “with God,” which is better than Lattimore’s “for God,” but both choose to render ouk adunatesei ... pan rema “nothing will be impossible” instead of the alternative “no word from God shall be void of power” (ASV). In verse 38 Lattimore’s “Here is” is less literal than the RSV’s “Behold.” Lattimore’s “the angel left her” is less literal and formal than the RSV’s “the angel departed from her.” There is one place where Lattimore is more literal and more accurate than the RSV in this passage (“I know no man”), but again I must say that overall the RSV is the more accurate version of the two.

In verse 48 Lattimore’s “he cast down his eyes” is a strikingly original translation of epeblepsen, but not as accurate as the RSV’s “regarded.” For most readers his “slave girl” will probably convey the meaning of doules better than “handmaiden.” His “will bless” is not a good translation of makariousin. It means “will consider blessed” or “call blessed,” as in the RSV. In 49 the RSV’s “holy is his name” reproduces the Greek word order (and hence its emphasis) better than Lattimore’s “his name is holy.” But in verse 50 Lattimore’s “and his mercy is for generations and generations, for those who fear him” follows the Greek word order and is more literal than the RSV. In verse 51 Lattimore’s “He has taken power into his arm” is peculiar. The Greek of this verse is thoroughly Hebraistic, and should be understood as in the RSV. In verse 52 Lattimore coins a Graecism, “dynasts,” for dunastas. This, along with some other peculiarties in the translation of this passage, may be his way of indicating the un-idiomatic character of the Hebraized Greek. But the RSV’s “mighty” is more accurate. In verse 54 Lattimore’s “reached out his hand” is a literalistic (if not etymologizing) rendering of antelabeto, and “through the memory of mercy” is rather awkward. In verse 55 his “seed” is more literal than the RSV’s “posterity.” I must also note that in Lattimore’s version, Mary’s Magnificat is not presented in poetic lines, as in the Westcott-Hort text and in the RSV, but appears only as part of a paragraph that begins at verse 39. Likewise the Benedictus of Zacharias (verses 68-79) and the Nunc Dimittis of Simeon (2:28-32) are not set apart and presented as poetry. This is not a good decision on Lattimore’s part, because these are definitely poetic in form, and they should be presented as such in a version.

Our inspection of Luke chapter 1 reveals some interesting points in Lattimore’s translation. There is a certain freshness to it, and its weaknesses do not amount to very serious errors. But for study purposes it is mostly inferior to the RSV.

1. The RSV’s “for some time past” here represents one of those dubious “advances” in the understanding of Hellenistic Greek that twentieth-century scholars have credited themselves with. Although the BAGD lexicon continues to list a meaning “for a long time” in its article on ἄνωθεν, the sources cited do not unambiguously support it. For example, it cites Josephus’ Antiquities, 15.250, which reads, Τούτους τοὺς λόγους αὐτῆς οὐκ ἐπιεικῶς ἤνεγκαν, ἀλλὰ πιστοὶ καὶ τὸν ἔμπροσθεν χρόνον ὄντες ἔτι μᾶλλον ἐν τῷ τότε διέμειναν μίσει τε τῆς Ἀλεξάνδρας καὶ τῷ μηδ' ὅσιον ὑπολαμβάνειν ζῶντα τὸν Ἡρώδην ἀπεγνωκέναι· φίλοι γὰρ ἄνωθεν ἦσαν, εἷς δ' αὐτῶν καὶ ἀνεψιὸς τοῦ βασιλέως Ἀχίαβος. I see no reason why φίλοι γὰρ ἄνωθεν ἦσαν should not be understood “for they were his friends from the first” years of his reign. Similarly Büchsel in his TDNT article (vol. 1, p. 378) asserts that ἄνωθεν had the meaning “from an earlier period,” and cites Josephus’ Against Apion 1.28, which reads: Ὅτι μὲν οὖν παρ' Αἰγυπτίοις τε καὶ Βαβυλωνίοις ἐκ μακροτάτων ἄνωθεν χρόνων τὴν περὶ τὰς ἀναγραφὰς ἐπιμέλειαν ὅπου μὲν οἱ ἱερεῖς ἦσαν ἐγκεχειρισμένοι καὶ περὶ ταύτας ἐφιλοσόφουν ... But again, why should ἄνωθεν not be understood “from the first” here? Surely “from an earlier period” would be very redundant after ἐκ μακροτάτων “from the most ancient times” in this sentence. Seeing how lame these proofs from Josephus are, I will not bother to examine the (fragmentary?) inscriptions and papyri also cited by BAGD for this sense. I note that the NRSV has gone back to the KJV’s rendering “from the very first” in Luke 1:3.

2. George B. Caird in his commentary on Luke in the Penguin series (1963) asserts that “the word Luke uses can refer to Christian instruction (Acts 18:25) or to the receipt of a hostile and inaccurate report (Acts 21:21, 24).” But H.A.W. Meyer states that in Acts 21:21 the word means “they have been instructed by Judaistic anti-Pauline teachers. Actual instruction, not generally audierunt [the rendering of the Vulgate at Acts 21:21], nor bare suspicion [Zeller], is expressed.” (Critical and Exegetical Handbook to the Acts of the Apostles, trans. Paton J. Gloag [Edinburgh, 1883], ad loc.). There is no good reason to think that Luke uses the word in a weakened sense of “informed” in either Acts 21:21 or Luke 1:4, and without such a reason we must assume that the word is used in its usual sense. Therefore “instructed” (KJV, ASV, NKJV) or “taught” (NASB, NIV, ESV) should be preferred over the RSV’s “informed.” For further discussion of this point of exegesis see the note in chapter 1 of my book Against the Theory of Dynamic Equivalence.