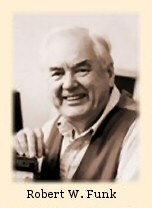 This volume is a product of the ultra-liberal Jesus Seminar which has received so much undeserved publicity in recent years. Their purpose in creating this version was to promote their skeptical views concerning the authenticity of sayings attributed to Jesus Christ in the four Gospels, and in the so-called "Gospel of Thomas"—an ancient gnostic document which they believe preserves some sayings of Jesus. The text is printed in different colors: red for the words they believe are authentic; pink for the words they think are probably authentic; gray for the words they think doubtful, and black for words they believe are falsely attributed to Jesus. Flipping through the pages we see that the red and pink rarely appear, with page after page of the text being entirely black. The preface informs us that "eighty-two percent of the words ascribed to Jesus in the gospels were not actually spoken by him."

The minuteness with which the editors have marked the text may be shown by their version of one well-known passage, in which they are unusually generous with the red and pink ink:

Concerning the Greek text the preface merely indicates that "the Fellows of the Jesus Seminar have developed their own critical edition." Checking a few passages, we find that in general the oldest manuscripts are followed. We might question the wisdom of their decision to omit the ending of Mark without comment. Strangely enough, the Story of the Adulteress, which has much less support in early manuscripts than does the ending of Mark, is retained (within brackets) in the 8th chapter of John's Gospel. They explain that the story is included because the editors "assigned the words and story to a special category of things they wish Jesus had said and done."

The translation itself, which has been named the "Scholars Version" (SV) by the editors, employs inclusive language, of course, and is generally done according to the method of "dynamic equivalence." The style is very colloquial and sometimes crude. In the preface they explain that they have "shunned pious terms," preferring instead "the average American's working vocabulary." And so we have the following rendition of the words of Jesus (printed in gray) in Matthew 23:13.

You scholars and Pharisees, you impostors! Damn you! You slam the door of Heaven's domain in people's faces. You yourself don't enter, and you block the way of those trying to enter.

The editors falsely assert, along with other recent translators who have catered to the debased taste of our generation, that the Greek New Testament itself is written in a style that corresponds to what we know as "street language." Although the New Testament is not written in the refined style of the Greek tragedians, and uses the simpler Greek of its time, it is not written in an informal and colloquial style. Other examples of the version's colloquial style (in which it often resembles Eugene Peterson's The Message, published in the same year) are:

Matt 22:12. The king came in to see the guests for himself and noticed this man not properly attired. And he says to him, "Look, pal, how'd you get in here without dressing for the occasion?"

Mark 1:41. Although Jesus was indignant, he stretched out his hand, touched him, and says to him, "Okay—you're clean!"

Luke 5:20. When Jesus noticed their trust, he said, "Mister, your sins have been forgiven you."

Robert Funk's book Honest to Jesus (San Francisco: Harper Collins, 1996) includes a chapter on "Translation and Text" in which he discusses the translation principles of the "Scholars Version" at some length. But his explanations are incoherent. First he states that a Bible translation should be cast in an unfamiliar idiom so as to indicate its "semantic and cultural distance" and to present Jesus as a "stranger to the modern temper":

The first barrier to understanding the origins of Christianity is a lack of appreciation of the semantic and cultural distance that separates modern translations into English from the original Greek texts. The initial step in overcoming that barrier is to defamiliarize the words of, and stories about, Jesus. To defamiliarize means to employ fresh, vibrant language wherever possible, while remaining faithful to the sense and style of the original. If we do not defamiliarize, we will read right over the words. The King James Version lulls the reader to sleep; although beautiful, the language is archaic, and the meaning is ensconced in sonorous cadences and Shakespearean phrasing. The Scholars Version, along with some other modern translations, is designed to wake the reader up. When Jesus once again becomes a stranger to the modern temper, he will be able to command a fresh hearing. (p. 81)

But then, in stark contradiction to the "defamiliarization" principle, he emphasizes the need to stay "close to the modern ear," by avoiding anything "quaint" or "sexist," and by using expressions that "we" would use in the circumstances:

It is important to capture, if possible, the style and texture of the original. In the case of the Jesus tradition, that entails making aphorisms sound like witticisms and not like flat platitudes. "Since when do the able-bodied need a doctor? It's the sick who do" [Mark 2:17] has the right ring to it. "What you treasure is your heart's true measure" [Matt 6:21] sounds more like a proverb than "For where your treasure is, there your heart will be also" (Revised Standard Version). "Those who promote themselves will be demoted, and those who demote themselves will be promoted" [Luke 14:11] strikes a note close to the modern ear, in contrast to "For everyone who exalts himself will be humbled, and he who humbles himself will be exalted" (New International Version), which sounds a little quaint, in addition to the sexist "himself" and "he who." "Congratulations, you poor! God's domain belongs to you" [Luke 6:20] goes straight to the heart of the matter in English; "Blessed are you who are poor, for yours is the kingdom of God" skirts the issue with archaic language and too many words. When someone has been especially favored by circumstances, we do not say "blessed are you" in English idiom, we offer them congratulations. In aphoristic speech, brevity, brilliance, and tone are essential. [Robert W. Funk, Honest to Jesus: Jesus for a New Millenium (San Francisco: Harper Collins, 1996), p. 85]

These principles are incompatible. Do we want the words to be in an unfamiliar idiom, so that Jesus appears as "a stranger to the modern temper;" or do we want words "close to the modern ear"? We cannot have both. The modern ear is attuned to the modern temper, and one who speaks a modern idiom is no stranger to it. If the expression "you are blessed" sounds archaic now, and "congratulations" strikes a note closer to the modern ear, this is not unrelated to the temper of the times. It is a good example of how variations of idiom sometimes signal a real semantic and cultural distance. To substitute the one for the other is to gloss over the difference.

Whatever explanations may be given for it, the style of the Scholars Version is very much in tune with the modern temper, and we sense that it is especially designed to discourage all feeling of reverence for the text. The translators have "shunned pious terms" because they are impious.

The Jesus presented in this book is not our Lord Jesus Christ. The one redeeming virtue of it is that the editors have been so honest concerning their unbelief, and about their desire to aggressively promote this unbelief among the common people who are still ignorant of "the assured results of critical scholarship" (introduction, p. 34).

Although the publicity hounds of the "Jesus Seminar" have apparently fooled many television and newspaper reporters into thinking that they represent the great majority of biblical scholars, in fact this is not the case at all, as may be seen in the literature listed below. This reviewer, who was studying at Pittsburgh Theological Seminary when The Five Gospels appeared, remembers the derisive comments made by several liberal professors in that school concerning the work of the Jesus Seminar, which they characterized as a fringe element. What they found most objectionable was the implicit anti-Judaism involved in the Seminar's approach: in order to represent Jesus as some kind of gnostic sage—congenial to the neo-gnostic "New Age" movement of our day—the Seminar denies the authenticity of every word which reflects the Palestinian Judaism in which Jesus lived and ministered.

Links to articles on the web