On the Perspicuity of Scripture

This leads me to ask, How much of the Bible is really clear to readers or hearers who have not received much religious education? Or how much is really clear to people whose religious education has fostered wrong ideas about the meaning of key words in the Bible? What can we Protestants really claim concerning the "perspicuity of Scripture" when teenagers in our own churches might have problems understanding a simple statement about the righteousness of God?

Some will say that problems like this are best solved by avoiding words like "righteousness." The girl I mentioned above would not have raised any question about God's righteousness if I had used the word "good" instead. And it certainly is true that, in the instruction of young children, we should adapt our language to their level, or else define our words carefully, if we want to be effective teachers. But the idea that such basic Christian words as "righteousness" should be avoided in Bible versions meant for teenagers leads to many more problems than it solves. We cannot go on thinking that we must make the whole Bible intelligible to everyone by such means, forever dumbing it down, substituting vague and general words in common secular use for the semantically rich terms of Judaism and Christianity, without ever facing the fact that something is lost by such a method. Students could benefit from a few lessons from teachers who are able to explain some things. At some point this must be acknowledged.

This admission should create no embarrassment for Protestants, because the traditional Protestant teaching on the perspicuity or clarity of Scripture does not assert that everything in the Bible is (or ought to be) easily understood by the uneducated. This idea comes not from the Protestant Reformers, but from naive Pietists, mostly of the Anabaptist strain, who typically devalue education. Among such persons a counter-factual notion of "plenary perspicuity" tends to prevail, and the presence of difficulties in the Bible is practically denied. The traditional Protestant teaching, on the other hand, frankly acknowledges that in the Bible there are many things of considerable obscurity and difficulty, and it merely asserts that the Bible's most important teachings concerning salvation are clear enough that they may be understood by everyone who studies them carefully enough. The authors of the Westminster Confession of Faith (1647) expressed it thus:

All things in Scripture are not alike plain in themselves, nor alike clear unto all; yet those things which are necessary to be known, believed, and observed, for salvation, are so clearly propounded and opened in some place of Scripture or other, that not only the learned, but the unlearned, in a due use of the ordinary means, may attain unto a sufficient understanding of them.

In the sixteenth century this subject was often addressed by Protestant authors. Roman Catholic critics had argued that the Sola Scriptura principle cannot be accepted, because the need for learned interpretation is so obvious; and they tended to misrepresent the Protestant teaching in this matter. So it was necessary for Protestant apologists to avoid extravagant statements and explain their teaching very carefully. Below is an excerpt from William Whitaker's Disputation on Holy Scripture (1588) 1 in which he acknowledges interpretive difficulties, and suggests that these difficulties are in fact providential and salutary.

Luther was far from such madness as to say, that there was nothing difficult in scripture, or that it did not need an interpretation. Yea, on the contrary, in the preface to his Commentary upon the Psalms, he acknowledges that there are many obscurities and difficulties in the scripture, which God hath left us, as if on purpose to keep us constantly scholars in the school of the Holy Spirit. And in the same place he affirms, that a man must be impudent who would say that he understood even any one book thoroughly: and the same hath ever been the opinion of us all.

The state of the question, therefore, is not really such as the papists would have it appear; but our fundamental principles are these: First, that the scriptures are sufficiently clear to admit of their being read by the people and the unlearned with some fruit and utility. Secondly, that all things necessary to salvation are propounded in plain words in the scriptures. Meanwhile, we concede that there are many obscure places, and that the scriptures need explication; and that, on this account, God's ministers are to be listened to when they expound the word of God, and the men best skilled in scripture are to be consulted. So far concerning the state of the question.

WHY GOD WOULD HAVE MANY OBSCURITIES IN THE SCRIPTURES.

We should carefully bear in memory the preceding distinctions drawn by Luther; for they are sufficient to obviate almost all the arguments of the papists in this question. But before proceeding to their arguments, I have thought it proper to set forth the reasons on account of which God was willing that there should be so many things of considerable obscurity and difficulty in the scriptures. This contributes much to the better understanding of the matter upon which we treat. The fathers write excellently well upon this subject, as Clemens Alexandrinus, Stromat. Lib. vi., Augustine, de Doct. Christ. Lib. ii., Gregory, Homil. vi. in Ezechiel, and others.

Now the causes are such as follow: First, God would have us to be constant in prayer, and hath scattered many obscurities up and down through the scriptures, in order that we should seek his help in interpreting them and discovering their true meaning. Secondly, he wished thereby to excite our diligence in reading, meditating upon, searching and comparing the scriptures; for, if every thing had been plain, we should have been entirely slothful and negligent. Thirdly, he designed to prevent our losing interest in them; for we are ready to grow weary of easy things: God, therefore, would have our interest kept up by difficulties. Fourthly, God willed to have that truth, so sublime, so heavenly, sought and found with so much labour, the more esteemed by us on that account. For we generally despise and contemn whatever is easily acquired, near at hand, and costs small or no labour, according to the Greek proverb, επι θυρας την υδριαν. But those things which we find with great toil and much exertion, those, when once we have found them out, we esteem highly and consider their value proportionally greater. Fifthly, God wished by this means to subdue our pride and arrogance, and to expose to us our ignorance. We are apt to think too honourably of ourselves, and to rate our genius and acuteness more highly than is fitting, and to promise ourselves too much from our science and knowledge. Sixthly, God willed that the sacred mysteries of his word should be opened freely to pure and holy minds, not exposed to dogs and swine. Hence those things which are easy to holy persons, appear so many parables to the profane. For the mysteries of scripture are like gems, which only he that knows them values; while the rest, like the cock in Æsop, despise them, and prefer the most worthless objects to what is most beautiful and excellent. Seventhly, God designed to call off our minds from the pursuit of external things and our daily occupations, and transfer them to the study of the scriptures. Hence it is now necessary to give some time to their perusal and study; which we certainly should not bestow upon them, if we found every thing plain and open. Eighthly, God desired thus to accustom us to a certain internal purity and sanctity of thought and feeling. For they who bring with them profane minds to the reading of scripture, lose their trouble and oil: those only read with advantage, who bring with them pure and holy minds. Ninthly, God willed that in his church some should be teachers, and some disciples; some more learned, to give instruction; others less skilful, to receive it; so as that the honour of the sacred scriptures and the divinely instituted ministry might, in this manner, be maintained.

Such was the wisdom of the Holy Spirit, wherewith, as Augustine expresses it, De Doctrina Christ. Lib. ii. c. 6, he hath modified the scriptures so as to maintain their honour and consult our good. Other causes more besides these might be adduced; but it is not necessary to enumerate more.

We might sum up much of what Whitaker says here under the old adage, "there is no gain without pain." Clearly there is not much support here for the more extravagant notions or expectations of perspicuity which have obtained wide currency in our time. 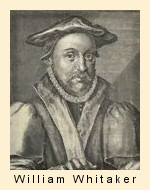 William Whitaker (1548-1595) was a leading Puritan scholar of the Church of England. He received his education at Trinity College Cambridge, and became Regius Professor of Divinity there in 1579. He was appointed Master of St. John's College in 1587. He is chiefly remembered today for his polemical works in defense of the Reformation, of which the best known is his Disputation on Holy Scripture, published in 1588.