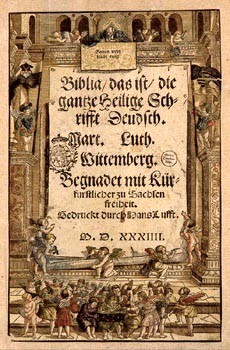 Luther on Translating the Prophets

Nos jam in Prophetis vernacule donandis sudamus. Deus, quantum et quam molestum opus, Hebraicos scriptores cogere Germanice loqui, qui resistunt, quam Hebraicitatem suam relinquere nolunt, et barbariem Germanicam imitari, tanquam si philomela cuculum cogatur, deserta elegantissima melodia, unisonam illius vocem detestans, imitari. “We are now sweating over the translation of the Prophets into German. O God, what a great and hard toil it requires to compel the writers against their will to speak German! They do not want to give up their Hebrew and imitate the barbaric German. Just as though a nightingale should be compelled to imitate a cuckoo and give up her glorious melody, even though she hates a song in monotone.” (Dr. Martin Luther's Sämmtliche Werke in beiden Originalsprachen, Briefwechsel, Volume 6 [Stuttgart, 1895], Nr. 1348; 14. Juni 1528, Luther an Wenc. Link in Nürnberg.)

Luther on the Authority of Scripture

I have learned to ascribe the honor of infallibility only to those books that are accepted as canonical. I am profoundly convinced that none of these writers has erred. All other writers, however they may have distinguished themselves in holiness or in doctrine, I read in this way I evaluate what they say, not on the basis that they themselves believe that a thing is true, but only insofar as they are able to convince me by the authority of the canonical books or by clear reason. (WA, 2. 618. Contra malignum Iohannis Eccii iudicium ... Martini Lutheri defensio 11519).

Unless I am convinced by the testimonies of the Holy Scriptures or evident reason (for I believe in neither the Pope nor councils alone, since it has been established that they have often erred and contradicted themselves), I am bound by the Scriptures that I have adduced, and my conscience has been taken captive by the Word of God; and I am neither able nor willing to recant, since it is neither safe nor right to act against conscience. God help me. Amen. (WA, 7, 836-38.)

Luther on the Inferior Authority of the Church

[It] is an accursed lie that the pope is the arbiter of Scripture or that the church has authority over Scripture. This is what the canonists and commentators on the Sentences have wickedly declared, on the following basis: "The church has approved only four gospels, and therefore there are only four. For if it had approved more, there would have been more. Since the church has the right to accept and approve as many gospels as it wishes, it follows that the church is superior to the gospels." What a splendid argument! I approve Scripture. Therefore I am superior to Scripture. John the Baptist acknowledges and confesses Christ. He points to Him with his finger. Therefore he is superior to Christ. The church approves Christian faith and doctrine. Therefore the church is superior to them. To refute this wicked and blasphemous doctrine of theirs you have here a clear text and a thunderbolt. Here Paul subordinates himself, an angel from heaven, teachers on earth, and any other masters at all to Sacred Scripture. This queen must rule, and everyone must obey, and be subject to her. The pope, Luther, Augustine, Paul, an angel from heaven — these should not be masters, judges or arbiters, but only witnesses, disciples, and confessors of Scripture. Nor should any doctrine be taught or heard in the church except the pure Word of God. Otherwise, let the teachers and the hearers be accursed along with their doctrine. (Luther, "Lectures on Galatians," in Luther's Works, vol. 26, translated by Jaroslav Pelikan [St. Louis: Concordia, 1963], pp. 57-8.)

Bibliography on the Lutheran Doctrine of Scripture

Preus, Robert D. The Inspiration of Scripture; a study in the theology of the seventeenth century Lutheran dogmaticians. Edinburgh: Oiver and Boyd, 1955.