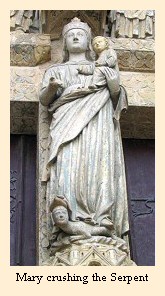 "I will put enmities between thee and the woman, and thy seed and her seed; *she shall crush thy head, and thou shalt lie in wait for her heel."

*She shall crush. Ipsa, the woman; so divers of the fathers read this place, conformably to the Latin; others read it ipsum, viz., the seed. The sense is the same: for it is by her seed, Jesus Christ, that the woman crushes the serpent's head.

Most Protestants are aware of the fact that for centuries the Roman Catholic Church discouraged laymen from studying the Scriptures independently. It was partly for this reason that Roman Catholics did not feel an urgent need for English translations of the Bible, and lagged far behind the Protestants in the production of such versions. Nevertheless, at the end of the sixteenth century the Roman Church did provide an English translation based upon the Vulgate, called the Douay-Rheims version, and it also approved the revisions of this version done by Bishop Challoner in the eighteenth century. This latter version was very similar to the King James version (though based on the Vulgate rather than the Greek text), and was used as the official version in English-speaking Roman Catholic churches up to the middle of the twentieth century. The Douay-Rheims and the Challoner-Rheims embodied Roman Catholic teaching in several ways. They included the Apocrypha (which Catholics call the Deuterocanonical books) as canonical, they sometimes showed a Catholic bias in the translation of the text, and they were printed with explanatory notes which served to instruct the reader in traditional Roman Catholic interpretations. The "Canon Law" of the Roman Church required all Bible versions to include such explanatory notes, and it also required all editions to be reviewed and officially approved by a Bishop of the Roman Church. But even after all these precautions were taken with the Bible, up until the 1960's many Catholics continued to feel that it was not really proper for a layman to study the Bible for himself.

This situation changed dramatically during the 1960's, along with many other changes that took place in the Roman Catholic Church in that decade. The Second Vatican Council at that time directed that the worship service (called the "mass") should be conducted in vernacular languages rather than in Latin, and gave official encouragement to the study of the Bible by all. This, from a Protestant point of view, would seem to be a very positive change. But unfortunately, during the 1950's the British and American Roman Catholic churches came under the influence of a liberal element, much in the same way that the mainline Protestant denominations fell under liberal control during the 1930's. And like their counterparts in the Protestant churches, liberals in the Roman Catholic Church have done what they could to promote the skeptical reading of the Bible. And so when new English versions were done by Roman Catholics, they appeared with annotations (still required by Canon Law) which served to teach liberal critical ideas about the Bible. So in the history of the Roman Catholic versions we have two periods: in the first period, extending from about 1600 to 1960, Catholic Bibles were based upon the Vulgate and they served to promote traditional Roman Catholic teachings; in the second period, from 1960 to the present, they are based upon the same Hebrew and Greek texts used by Protestants, and they are relatively free of dogmatic bias — but they include notes which discourage the reader from regarding the Bible as the inerrant Word of God.