Much of the heretical literature of the second century was produced by the Gnostic sects. The teaching of the Gnostics was deeply heretical. Their Christology is called Docetic, because they asserted that Christ only seemed (Greek, docein) to have a body of flesh, but that he was entirely a spirit being, like the angels. They made this assertion because they were much influenced by certain Greek philosophers, who taught that material things were necessarily corrupt, and that matter itself was either illusory or always at odds with spiritual realities. The Gnostics saw Jesus only as a divine revealer of spiritual truths, and believed that salvation was attained by those few who were able to understand his mysterious teachings and actions; they believed in a spiritual resurrection through the attainment of wisdom. The Gnostic cults died out during the fourth century, and their literature was almost entirely lost. Before the middle of the twentieth century, modern scholars were dependent upon descriptions and quotations of this literature in the witings of the orthodox Church Fathers who opposed it in ancient times. But around 1945 a substantial collection of ancient Gnostic literature came to light in several Coptic manuscripts discovered in the neighborhood of Nag Hammadi, Egypt. The following extracts are from published English translations of these manuscripts, and they illustrate the typical themes of Gnostic teaching.

The Gospel According to Thomas

The Gospel of Phillip

The following lines from The Gospel of Phillip illustrate the typical Docetic Christology of the Gnostic sects. The English translation is by Wesley W. Isenberg, in James M. Robinson, ed., The Nag Hammadi Library in English, translated and introduced by members of the Coptic Gnostic Library Project of the Institute for Antiquity and Christianity, Claremont, California, third edition (Leiden: E.J. Brill, 1988), pp. 144-45.

"Jesus took them all by stealth, for he did not appear as he was, but in the manner in which they would be able to see him . . . He appeared to the angels as an angel, and to men as a man. Because of this his word hid itself from everyone . . . When he appeared to his disciples in glory on the mount . . . he made the disciples great that they might be able to see him in his greatness."

The Second Treatise of the Great Seth

The following portion of The Second Treatise of the Great Seth illustrates how the Gnostics viewed the Old Testament. The words Hebdomad, meaning "the seventh god," and Archon, "the ruler," are epithets they used in reference to the God of Israel. English translation by Roger A. Bullard and Joseph A. Gibbons, in James M. Robinson, ed., The Nag Hammadi Library in English, translated and introduced by members of the Coptic Gnostic Library Project of the Institute for Antiquity and Christianity, Claremont, California, third edition (Leiden: E.J. Brill, 1988), pp. 368-69.

"Adam was a laughingstock, since he was made a counterfeit type of man by the Hebdomad, as if he had become stronger than I and my brothers . . . Abraham and Isaac and Jacob were a laughingstock . . . David was a laughingstock . . . the prophets were laughingstocks . . . they came into being as counterfeits . . . Moses, a 'faithful servant,' was a laughingstock, having been named 'The Friend' since they perversely bore witness concerning him who never knew me . . . the Archon was a laughingstock because he said, 'I am God, and there is none greater than I. I alone am the Father, the Lord, and there is none other beside me. I am a jealous God, who brings the sins of the fathers upon the children for three and four generations,' as if he had become stronger than I and my brothers. Thus he was in an empty glory . . . I did not succumb to them as they had planned. But I was not afflicted at all . . . I did not die in reality but in appearance . . . I removed the shame from me . . . It was another . . . who drank the gall and the vinegar . . . who bore the cross . . . upon whom they placed the crown of thorns. But I was rejoicing in the height over all . . . I was laughing at their ignorance. I am Christ, the Son of Man." 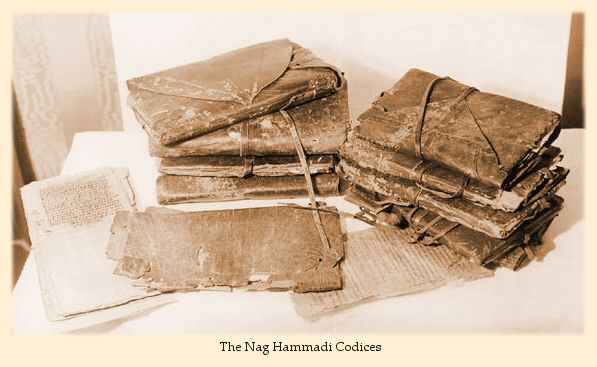 Photo courtesy of the Institute for Antiquity and Christianity in Claremont, California.