Reproduced below is the text of 1 Timothy 3:16–4:3 from Codex A, as presented in the photographic facsimile volume published by the British Museum in 1879. Of particular interest here is the reading in 3:16, where it may be seen that the manuscript reads ΘC "God was manifested in the flesh," employing the usual abbreviation ΘC for ΘEOC, with a stroke over the letters to indicate an abbreviation. However, textual critics believe that the ink in the center of the Θ and the stroke above were added by a corrector in modern times. Reasons for this belief are the color of the ink, and the fact that a "dot" has been placed in the Θ instead of a line. Tregelles writes, "The ink in which this has been done in A is sufficiently modern and black to declare its recent application" (An Account of the Printed Text of the Greek New Testament, London, 1854). Without these marks, the manuscript originally read ΟC "He who was manifested in the flesh." In the photograph below the ΘC in 3:16 is circled. Further down, in verse 4:3, there is another ΘC circled for comparison. Click on the circled areas for a larger view. 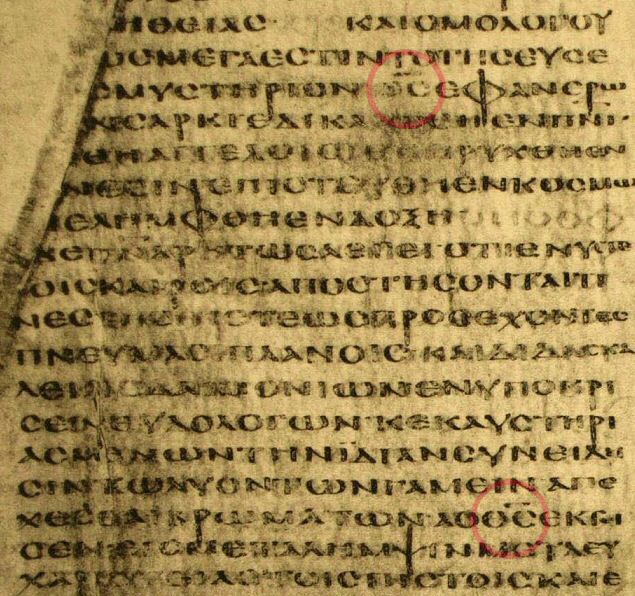 Photo source: E. Maunde Thompson, ed., Facsimile of the Codex Alexandrinus: New Testament and Clementine Epistles (London: Trustees of the British Museum, 1879), published on the internet by The Center for the Study of New Testament Manuscripts.